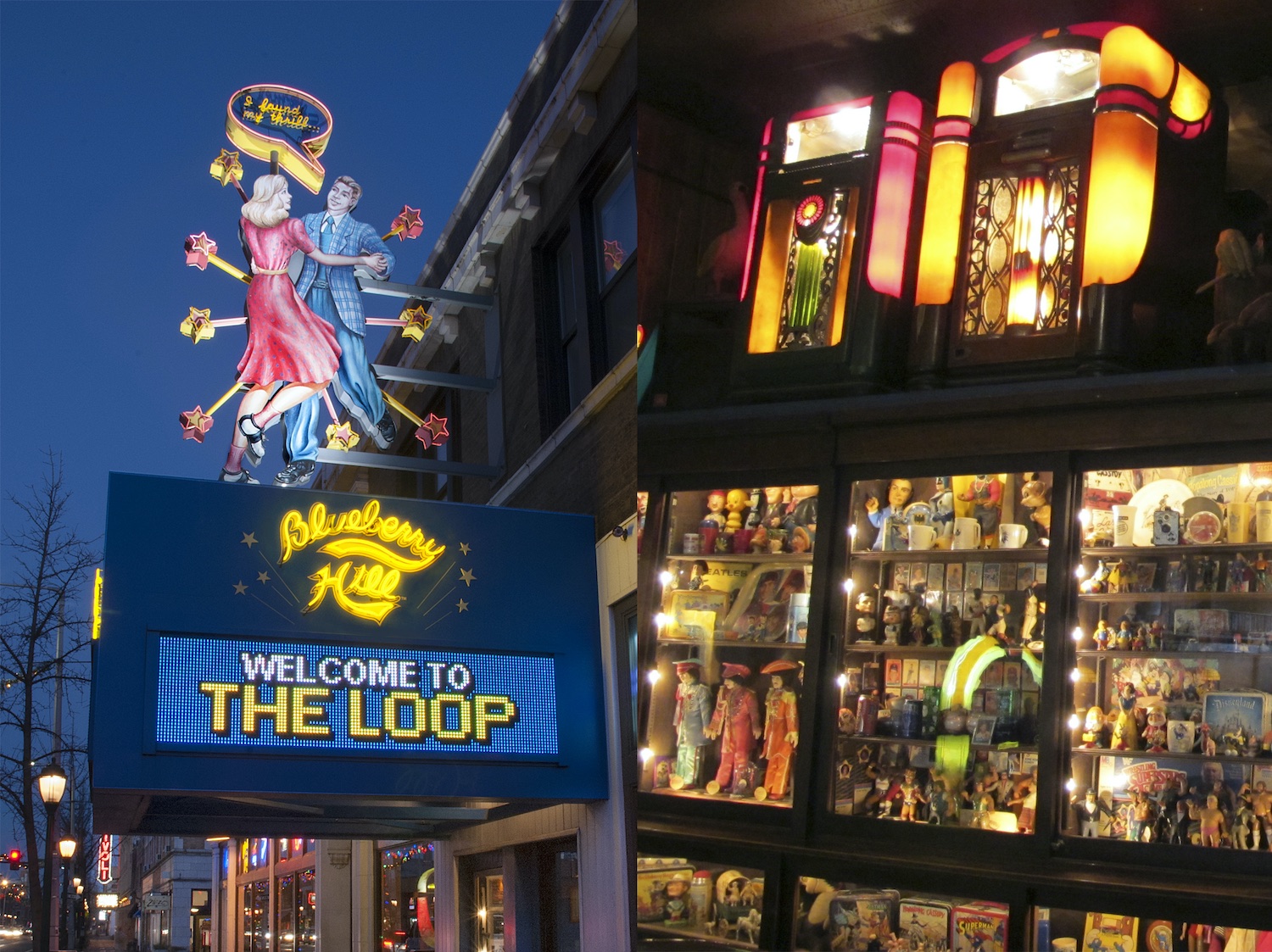 We are approaching our 50th Anniversary – here is our story!

We opened on Sept. 8, 1972. In the 1970s, St. Louis’s Delmar Loop neighborhood had seen better days. “We wanted to open a welcoming place that was about music, pop culture memorabilia, and great food to share a beer over,” say owners Joe Edwards and Linda Edwards. “We wanted the unique atmosphere to make conversation easy and enjoyable. Within a week of opening we realized we also needed to help revitalize the Delmar Loop area.”

In the beginning we just had a hot dog machine and served peanuts and beer nuts with our excellent beer selection, especially for the time. In 1974 we expanded our tiny kitchen to make room for a grill to cook what would become our famous burgers. “I felt St. Louis wanted a great burger, and I was hoping to provide it,” Joe says.

We had a tune-spinning Seeburg jukebox from day one. “I had a collection of 30,000 records that I rotated in and out of the jukebox. I wanted people to experience music they might not hear otherwise,” says Joe. That jukebox, which people from all over the country started coming to hear, was the beginning of our music history. It was named #1 Jukebox in the United States by Billboard and Esquire and #1 in the World by the BBC.

MUSIC HISTORY GETS MADE HERE
In 1985 we opened the Elvis Room to bring live music into Blueberry Hill. It was the next step for us and for helping to make The Loop the live music center of St. Louis. Fast forward to 1997: the legendary live music room the Duck Room is born. “We cut a hole in what is now the Piano Room,” Joe says, “put a Bobcat in there and dug five feet out of the basement ground in order to lower the floor. I wanted the room to have high ceilings and a big stage.”

Chuck Berry, The Father of Rock & Roll and the first person inducted into the Rock & Roll Hall of Fame, inaugurated our intimate, 340-capacity new Duck Room and played 209 consecutive monthly concerts there. Joe tells the story of how that came to be: “Chuck and I had been good friends since the early ’80s. One night in 1996 he was reminiscing about the smaller clubs he used to play when he was just starting out and how much he would love to play an intimate club again in contrast to large stadiums. There was a split-second pause. We looked at each other and said ‘Let’s do it.’ That’s how Chuck Berry came to play once a month at Blueberry Hill in a legendary concert series.”

Many bands play on the same historic stage Chuck Berry did for so many years. Acts such as Ed Sheeran, the Lumineers, John Legend, Nelly, and Grandmaster Flash have brought the house down. Music history really does happen here.

In 2017, we mourned the passing of Chuck Berry. “He was the father of Rock & Roll, played 209 monthly concerts in our Duck Room, and was a dear friend above all,” Joe says. “Goodbye, my friend.”

AN UNFORGETTABLE ATMOSPHERE
“I CAME FOR THE MUSIC AND STAYED FOR THE TERRIFIC ATMOSPHERE.” – BIG LEBOWSKI STAR JOHN GOODMAN
Your eyes will be popping when you see our pop-culture and music memorabilia collections! We’re like a museum you can wander through with a beverage. Joe personally collects and fills our nearly one hundred warm glowing display cases. “When I was seven I started collecting comic books, records and baseball cards,” Joe says. “At 10, I started collecting toys, sheet music, and oak furniture. At 12, it was vintage lunch boxes. At 16 I started collecting classic Wurlitzer juke boxes.”

If that’s what Joe was collecting as a kid (and storing for future display at Blueberry Hill!), just imagine what he’s collected since.

Joe’s most popular collection might be the hundreds of photos of him with music superstars and movie icons along with four U.S. presidents.

What will be your favorite collection? Star Wars? The Simpsons? Howdy Doody? Elvis? Pac‑Man? Vintage Pez dispensers? The largest collection of Chuck Berry artifacts and historic memorabilia on display in the world? We’d love to see you here and have you tell us which ones you like!

For example, for St. Patrick’s Day she turned the large display space into a bachelor’s apartment and every single thing in it was green: the big easy chair, the lamps, the beer bottles, the books, every single tchotchke. She called it “The Bachelor Pad of Paddy O’Furniture.”

One year for Halloween, she turned the display space into a creepy dentist’s office with an old-fashioned dentist’s chair and unsettling dental tools like rusty drills. In a live performance on Halloween, she had someone play the Dentist, and Blueberry Hill customers could come in and sit in the chair and “get their teeth worked on” while drinking their cocktails.

She’s also turned the space into fun scenes popular with children like Trimming Santa’s Tree. Set in Santa’s living room, she had Santa and five elves enter the room through the fireplace. Then the elves decorate Santa’s Christmas tree while Santa sits in his rocking chair, going over his hand-written list.

In honor of Dr. Martin Luther King Day, she created a powerful display of cabbage patch dolls, both black and white, sitting around a small, child-size birthday table, having cake and wearing birthday hats. In the background, a sign made with paper party napkins and streamers says “Happy Birthday, Martin.”