St. Louis Standards: Meshuggah Café Is the Center of the Conversation

Jen Kaslow, a longtime regular, is now the owner and steward of the beloved coffeehouse.

St. Louis Standards is a weekly column dedicated to the people, places and dishes that make our food scene what it is.

If you want to know the special place Meshuggah Café holds in the hearts of its longtime regulars, consider the term owner Jen Kaslow uses when she recounts its history.

As owner and steward of the University City Loop institution for the past six and a half years — and a regular for roughly two decades prior to that — Kaslow is well versed in the history of Meshuggah. Founded in 1992 by two Washington University students named Jonathan and Nick, Café Chaos, as it was then called, was established on Melville Avenue as a place to gather, smoke and watch soccer.

“They were two dreaded-up hippies — free spirits who just wanted a place to congregate, smoke freely and drink coffee,” Kaslow says. “It had this really dark vibe, and people would go in there late at night to smoke cigarettes, play chess and drink really strong coffee from an espresso machine, which, at that time, hadn’t yet become a thing. It was the place in the neighborhood where all the artists and intellectuals came.”

After a few years, the original owners had a falling out; one left the partnership and the other renamed the coffeehouse Meshuggah, running it business as usual until he sold it to then-regular Patrick Liberto in 1997. Under Liberto’s watch, Meshuggah remained the subversive, dark hub for poets, writers, philosophers, chess players, clove cigarette smokers and other grunge-era characters that frequented the bohemian neighborhood. At first, he made no changes to the place, keeping the coffee strong and catering to the late-night crowd of workers from Blueberry Hill and Vintage Vinyl until one day, there was a new policy he simply had to institute.

Meshuggah has been a Loop neighborhood gathering place for thirty years.

“He just couldn’t take the cigarette smoke anymore, so one day, he put an ashtray out front and made the place nonsmoking,” Kaslow recalls. “He lost a lot of business, but he stuck to his guns and kept the vibe the same otherwise. It was still a gathering place for people to exchange ideas and hang out lowkey.”

In 2003, Liberto made a change even bigger than the smoke-free policy when an opportunity arose for him to move Meshuggah from its small, off-the-beaten-path spot on Melville to a storefront directly on Delmar Boulevard. He took the chance despite protests from longtime Meshuggah loyalists who feared the more visible location would change the essential character of the coffeehouse from a counterculture gathering place to a watered-down version of itself. Though the new digs were certainly brighter by default — the large windows in the front of the cafe simply let in more daylight — the place retained its indie vibe while broadening its appeal.

In 2015, Liberto decided to sell Meshuggah in order to move back to his home state of Louisiana. On the day he made that announcement, Kaslow happened to stop in the shop, as she did nearly every day on her way to work, and heard the news that would change the trajectory of her life. 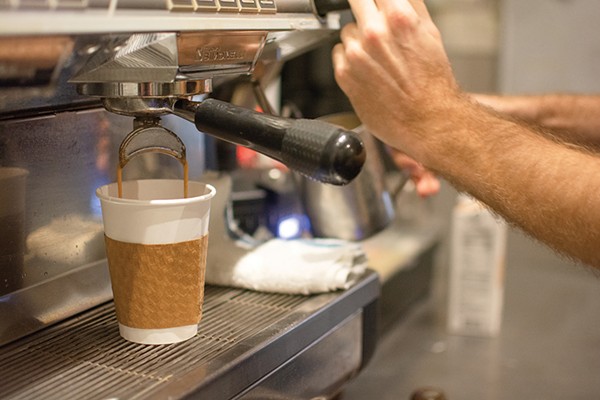 Barista Nick Henke has been coming to the cafe since he was a kid.

“I just had this feeling that someone had to buy this place, because it was such an institution at that point,” Kaslow says. “It was part of the fabric of the community and where everyone came together in the Loop. I wanted to maintain that spot for everybody, so I bought it on an impulse of wanting to keep this place that was so important to the Loop going.”

When Kaslow walked in the door to shadow Liberto on her first day as owner of Meshuggah, she had never pulled a shot of espresso in her life. What she lacked in coffee-making skills, however, she made up for in institutional knowledge of the place, dating back more than twenty years. Not long after Liberto had bought the coffee shop from its original owners, Kaslow started frequenting the place after walking in one day hoping to make a sale on a new product she had developed. A serious rock climber, Kaslow had come up with an idea for a coffee mug with a handle that could open and close like a carabiner. After designing and manufacturing the mug, she went door to door trying to sell it to businesses, and tried her luck with Liberto and Meshuggah. Though Liberto wasn’t able to purchase her mugs at the time, he and Kaslow developed a friendship and she fell in love with the place, frequenting it as her business grew and even after she moved into her teaching career.

Kaslow had no intention of leaving her job in education, but the thought of Meshuggah simply ceasing to exist was enough to make her upend her life and take matters into her own hands. Since taking over the cafe, she has done her best to serve as a steward of its legacy, maintaining the character of the place that had developed naturally over the years, but giving it a polish it so desperately needed.

“A lot of people have come back and said it’s retained its core vibe but it’s cleaner,” Kaslow laughs. “There are so many people who have ties to this place — people who got engaged here twenty years ago, or people who come back here to celebrate anniversaries. Nothing makes me happier than when they say the vibe is still the same.” 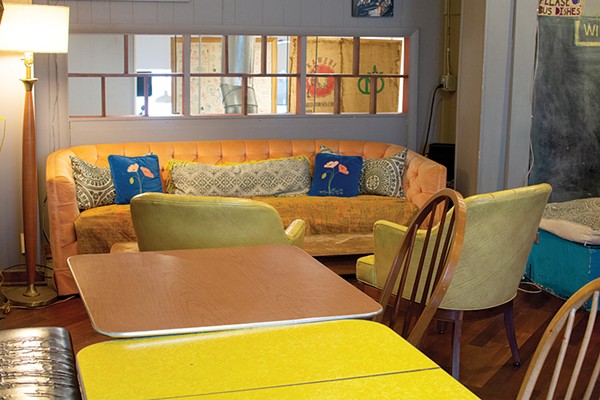 The upstairs loft area contains many pieces of old furniture from the original Meshuggah on Melville Avenue.

Kaslow understands that what those longtime regulars feel when they come back is an intangible feeling that goes way beyond the fact that they are sitting at the same tables and drinking the same house Americano out of the same mugs as they did all those years ago. There is a connection to the cafe that they can feel radiating from every corner of the building, and in the faces of every person they recognize, that links them to whatever special moment in time the place triggers within them.

“There is a table I recognize from the Melville location, and I remember the artist who decoupaged it,” Kaslow says. “There is an intangible energy that comes from something that embedded. People feel that. Also — Patrick did it and I do this, too — I run it like it’s my home. When you are comfortable in a spot and your employees feel that way too, it generates from the kitchen out. I think this, and the fact that there are so many regulars that come in, give it that feeling. Eighty percent of the people that come in on a daily basis, I recognize their names and faces. They recognize each other too, and that gives everyone a sense of belonging.” 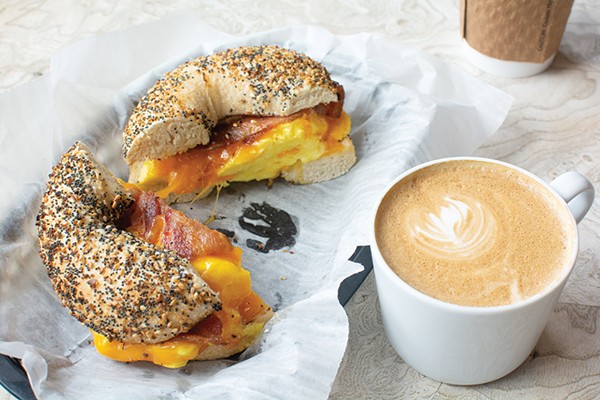 Meshuggah’s bagels, like the bacon egg and cheese, and its cortado, make it an essential Loop breakfast spot.

Now, just shy of seven years into running Meshuggah, Kaslow is looking to pass on the torch. Unwilling to sell the cafe to just anyone, she has committed to staying on until the right person comes along — someone who, like her, intends to honor the spirit of the coffeehouse and keep things as similar to the original feel as they can. She feels this is important not only for Meshuggah’s legacy, but for the Loop in general, which she sees as being in a transition period.

“I definitely saw it change from people with mohawks and army fatigues sitting on the Streetside Records wall and having it be this place where parents were leery of you going to a place where everyone was leaving,” Kaslow says. “Now they are coming back. It was hipster, then empty, and now it’s being repopulated.”

Kaslow believes that the Loop’s transition can be attributed to the growth of other artsy and entertainment areas cropping up in St. Louis over the years — Cherokee Street and the Grove, for instance. She also notes that Washington University’s increasing presence in the area has ushered in a great deal of change, though she doesn’t see that as a bad thing. Instead, she feels that the students bring with them an energy, and are just as interested in having the area stay interesting and eclectic because they, too, want to be a part of something unique. She believes these changes are why it’s so important for places like Meshuggah to continue to exist, and that no matter how much transformation the Loop sees, there will always be a place for a quirky cafe that fosters community.