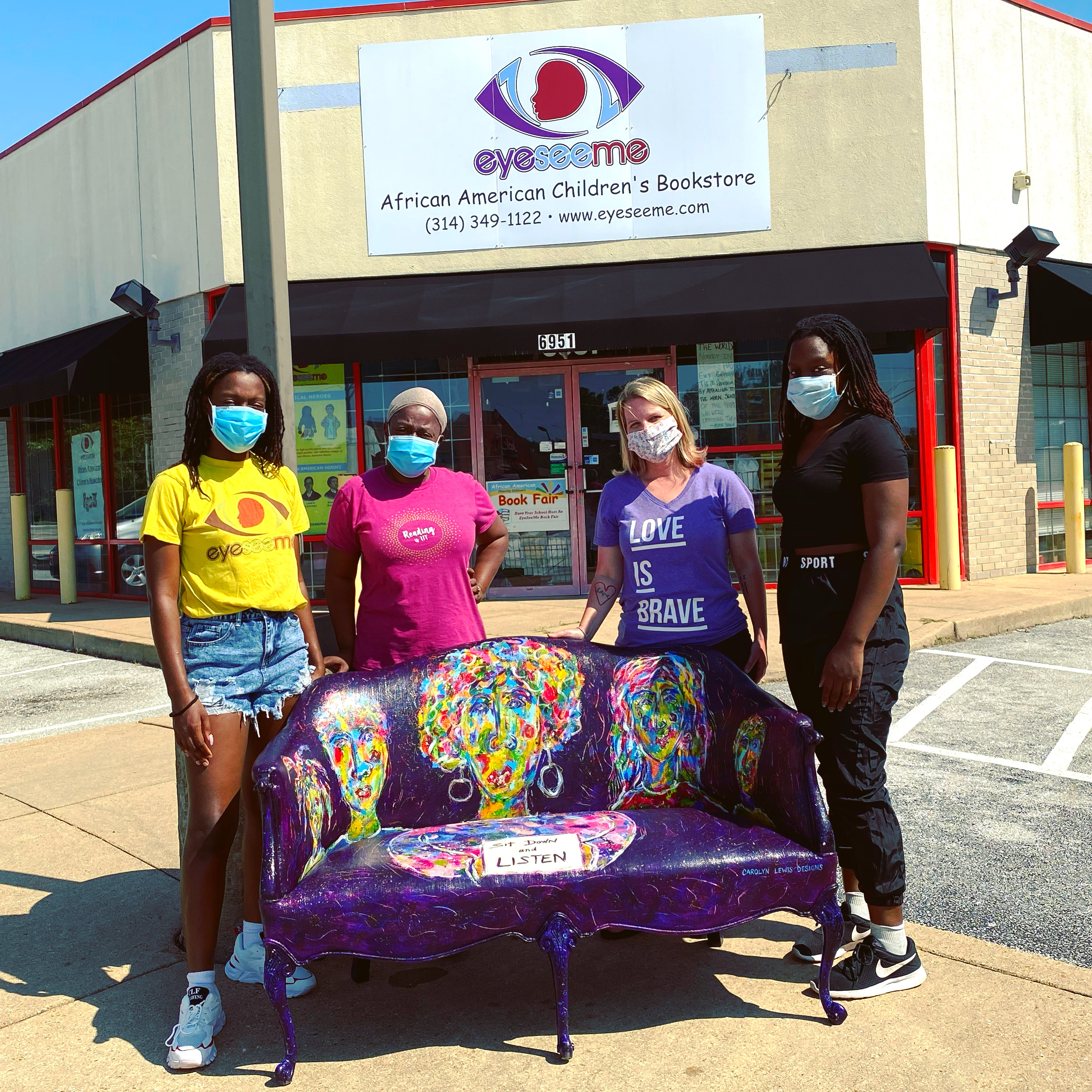 The “Sit Down & Listen Bench” is now touring University City.

A space for folks to connect and truly listen to one another’s stories. A space where awareness and action can take place.

Sit down and listen: Artist’s bench invites conversations about race

By Pat Eby Special to the Post-Dispatch

A colorful cabriole love seat painstakingly created by artist Carolyn Lewis may be coming to a shop, restaurant or park near you.

The love seat traveled to St. Louis from her parents’ home in Alabama, where it had stood quietly for 22 years, staid in its burgundy-and-green-striped upholstery. It spent the last seven years in the basement of Lewis’ south city house because she knew someday she would do something with it.

Today, as a public art piece, the once-sober seat bursts forth in varicolored swirls. On its back are paintings of five strong faces, people of all races and ages, each set in a deep purple haze. No longer a parlor piece, Lewis’ careful prep work and special paints allow the love seat to sit outdoors. Visible to everyone walking by, it invites them to “Sit Down and Listen.” Its back, broadly daubed in the colors of Lewis’ paint box, carries this message: “Love Your Neighbor.”

“There’s always a time when something is ready,” Lewis says. “We were cleaning our basement in a burst of activity when the idea for this piece came to me. In 2018, my younger sister, Sara, and her husband, Clay Ebersold, who are white, adopted two black children — my niece Cora, who will be 5 in July, and my nephew, Henry, who is now 4.

“My wife and I were also going through adoption for her to be named parent to our two children at the same time,” Lewis says. “We shared so much during the process. Cora and Henry became part of our family seamlessly. With all that is happening in our country now, Sara and I talk often. She recently said, ‘Henry’s cute now; he’s 4, but what about in 12 years when he’s 16?’ That awakened the mama bear in me. 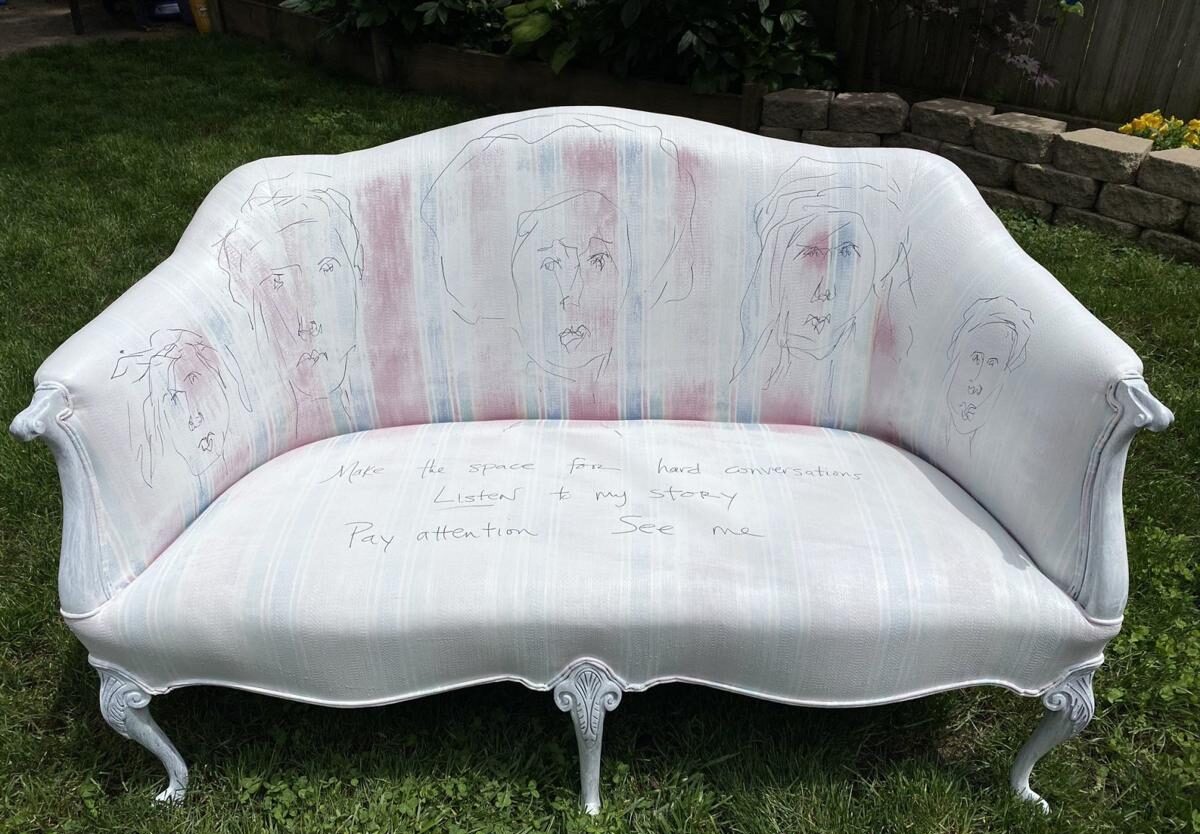 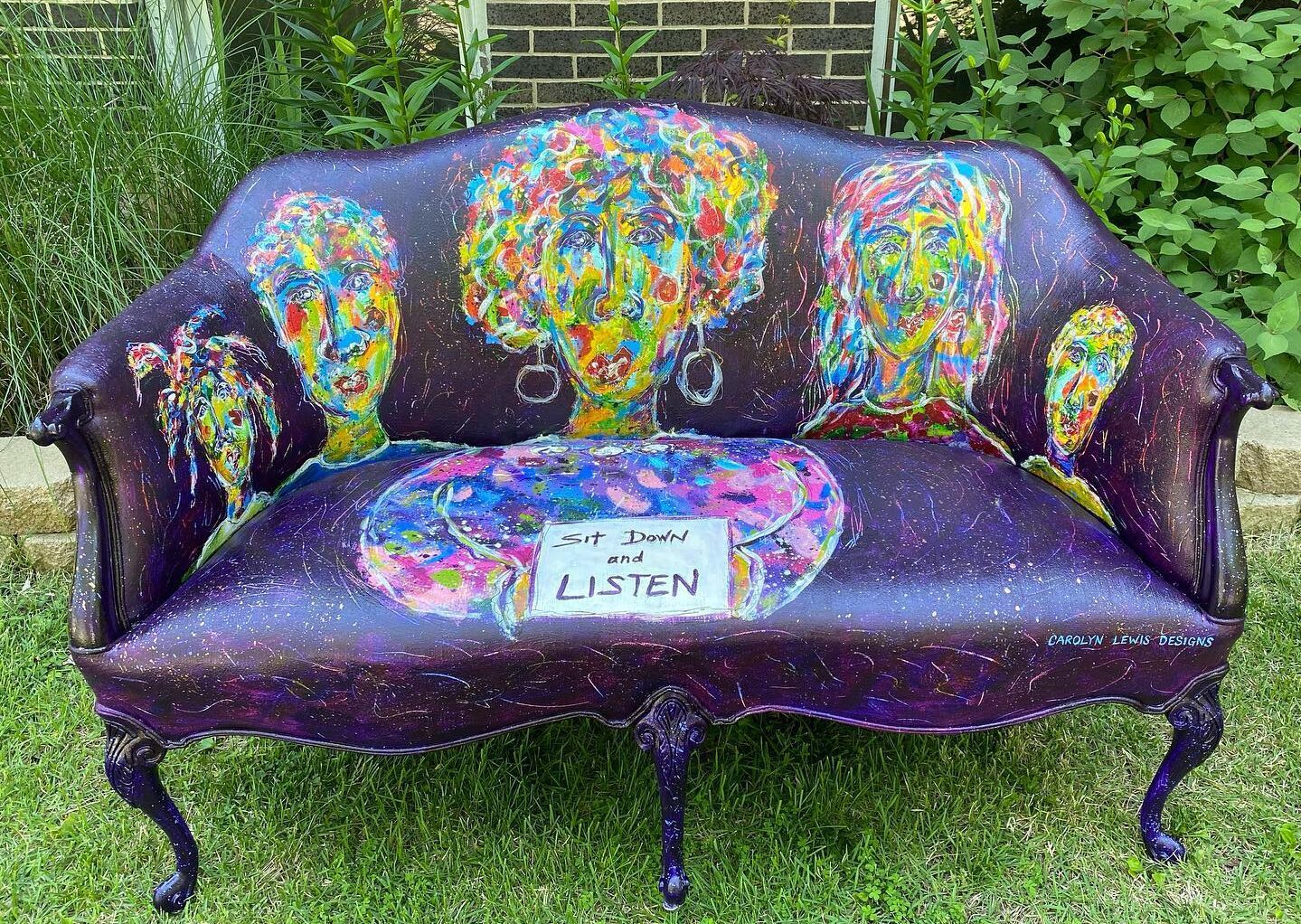 “I understand that saying ‘I don’t see color’ is no longer enough now. Honor their skin color,” Lewis says. “Love them.

“I cannot thank my sister enough for encouraging me to hold a mirror up to myself to discover what my part is in dismantling racism. What can I do? What is my story? What are the things I need to own up to?” she says.

Lewis, who has a degree in art therapy, picked up her paintbrushes to create an empowering love seat. In one week, after the release of the video of George Floyd’s death, in the shadows of the twin specters of the pandemic and racial injustice, Lewis finished the piece. She lettered her intentions on its seat before she painted it, a practice she follows in each of her artworks. She wrote, “Make the space for hard conversations. Listen to my story. Pay attention. See me.”

It wasn’t easy or convenient for Lewis to shoehorn a major art project into her regimen of stay-at-home school for her son Grant, 7, and her daughter Charlie Bea, 10, or to disrupt her work as an online art instructor and artist. It was necessary though, she says.

“We are extremely open with our children. We told them the story about George Floyd. We talked about protests. They both cried,” she says. She and her wife, Beth Gruver, talked to the children about white privilege in language they could understand. “We broke it down to real life situations.

“The hard conversations have to start when they’re young, so they are empowered to ask the hard questions when they are older,” Lewis says.

Creating the artwork took a toll on Lewis. “Physically, emotionally, mentally, and spirituality this was a hard piece to do. When I finished it, I wept,” Lewis says. She sent it out into the world in early June to Espresso Yourself. The neighborhood cafe and coffee shop sells and displays local artists’ works, including Lewis’ paintings, collages and cards. For owners Jules Karagiannis and her sister Tracy Calabro, hosting the love seat was a singular honor.

“The bench is just another piece of how our community is coming back together,” Karagiannis says.

“People were blown away by it,” she says. “It really looks inviting, and people responded to it. My husband, Dino, and I have had some great conversations lately. We’ve been watching movies and documentaries. There’s a scene in the movie “American Son” where actress Kerry Washington gets into what it’s like to be a black mother, and the fear they all have from the day their sons are born.

“That’s just not even in my brain. I never imagined when my girls went out that they wouldn’t come home safely.”

Lewis hopes her art starts conversations that reverberate throughout St. Louis. “This artwork — it is so deep in my core. This family heirloom, from the South. I made it a safe place where people can sit and have the hard conversations,” she says. “The arms hold you. You have to turn to face the other person: to see them, hear them and really listen. It’s time.”

The itinerary for the traveling love seat may be found at carolynlewisdesigns.com/new-events. Check each venue for hours. 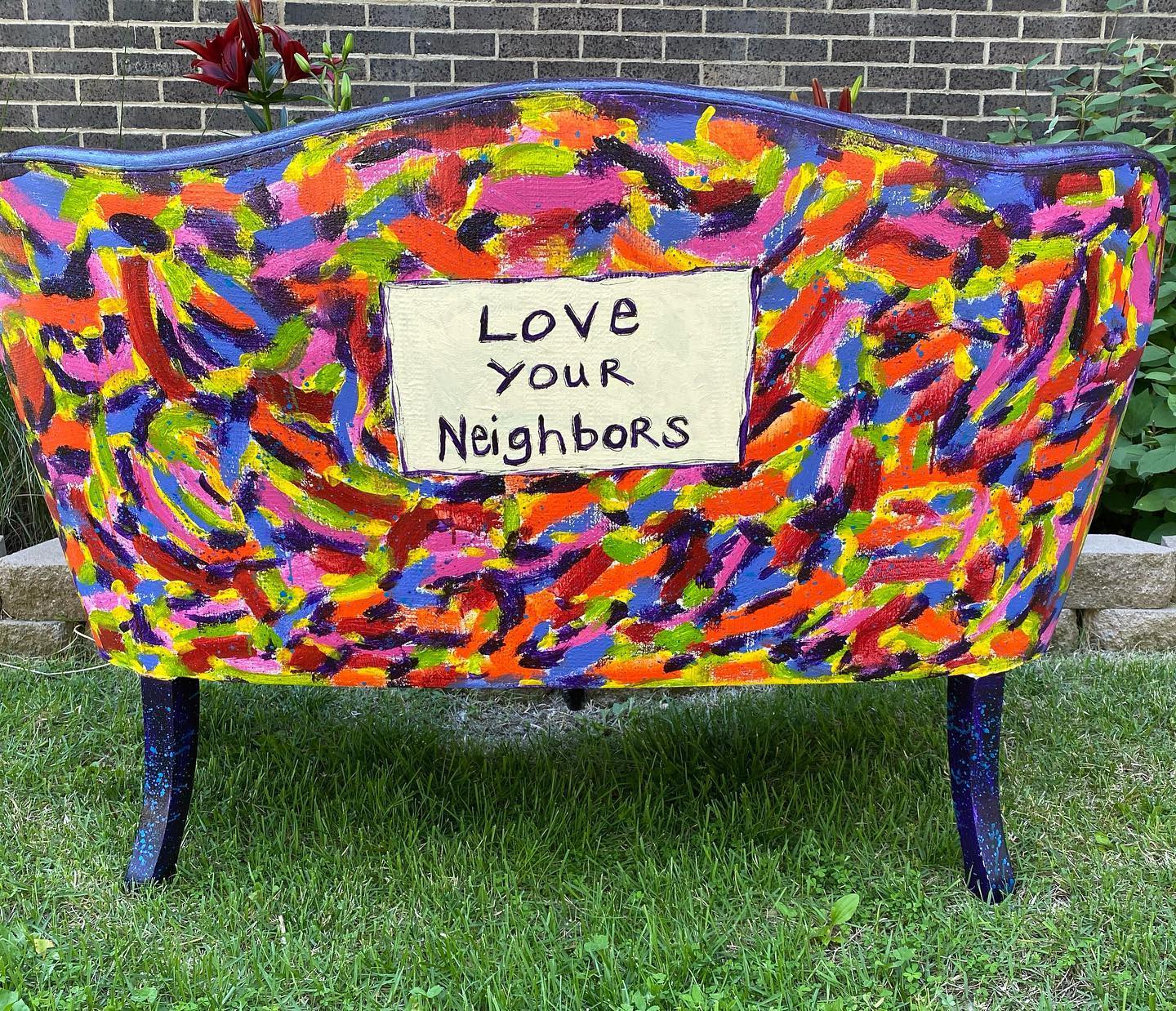 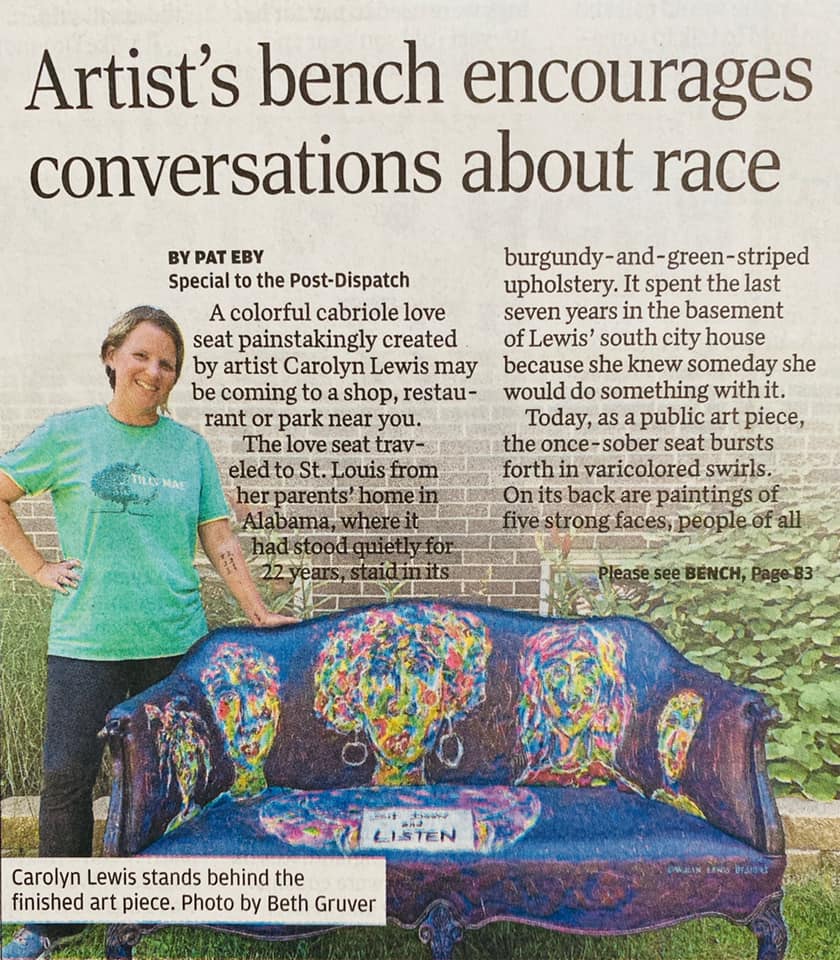